California’s native plants are under attack.

From our mountain habitats all the way down to our very backyard, invasive plant species are taking over. According to the U.S. Government, an invasive species is one that is non-native to the ecosystem and one whose introduction causes or will likely cause economic, environmental or human-health harm.

Invasive plants can often outcompete our natives because they don’t have the checks and balances they would have in their native land. Often this freedom leads them to grow faster and spread faster than the native plants they are replacing.

Many of the invasive plants are also huge fire hazards. They may go dormant, brown and brittle in summer, which accumulates to large amounts of dead stems or leaves. We tend to see this a lot while out in the Angeles National Forest and in the Santa Monica Mountains. With the help of TreePeople volunteers, we put in countless hours of hard work cutting back, pulling and removing invasives to make way for our native plants.

But what about your home? What plants, some of which you can still buy at your local nursery, should you stay away from?

We have put together a list of 5 invasive species that may look great in the garden, but don’t be fooled by a pretty face.

This deciduous tree gets quite large (80’-100’), quickly. It is one of the most invasive trees known in both urban and non-urban landscapes. Not sure it’s tree-of-heaven? Just rub the leaf and smell. If it’s stinky, it’s tree-of-heaven (“Stink tree” is another common name).

It is very hard to remove and will sprout from any seed or even small piece of root left in the ground. Its brittle branches break off easily and build up to create fuel for fires.

We know it has a “Moderately Invasive” rating, but we shudder to think of it popping up in our yards…and you should too.

To the untrained eye, arundo looks like bamboo. However, it is quick to take over waterways or areas where water accumulates and can reach 20 feet tall! It will push out native willows and other riparian (waterway) natives and disrupt the whole eco-system.

Water temperatures increase when arundo is present because it provides little shading compared to trees, which limits which critters can live in the warmer water. Arundo also retains more dead biomass than trees or woody shrubs, making more fuel for fires.

Iceplant, both sea and highway variations, are so common in our chaparral, coastal scrub, grasslands, beaches, dunes and bluffs that you may think this succulent groundcover with the pink to pale yellow flowers is a California native – guess again!

This water-filled, bright-green succulent plant has a thick underlying mat of dead roots and stems, which create kindling to a fire and block native plants from growing. On hillsides, the sheer volume and weight of the plant can cause it to break loose, creating your own private landslide.

This creates a triple threat – dense coverage blocks out native plants, it poses a fire risk and it can cause landslides. Just say no to iceplant! 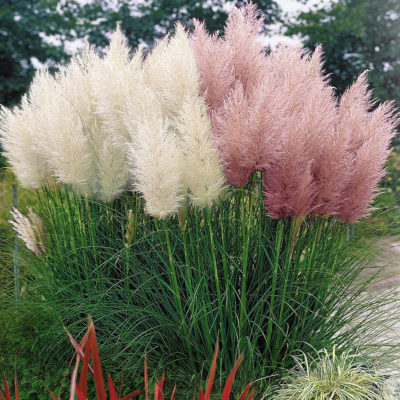 Those big plumes light up like candles on Paul Bunyan’s birthday cake in a fire. Pampasgrass spreads quickly in areas of bare ground and can be found up and down our coast and even into the Mojave desert.

It has the extra bonus of having extremely sharp-edged leaves that give it another common name of “sawgrass.” Ouch!

This palm is the very tall skinny one that is so iconic to LA, but it is actually quite invasive!

It sprouts up in sidewalk cracks or anywhere in your yard where its seeds land. The dead fronds that we see hurtling down on windy days create a huge fire hazard.

The minuscule amount of shade they produce would make them a poor choice to plant whether they were invasive or not.

Stay tuned for our next list of TreePeople’s Most Wanted but in the meantime, make sure to check out PlantRight or Don’t Plant a Pest to get a complete list of invasive species to steer clear of!