It’s beautiful to see how nature helps pave the paths of those who inspire our lives.

TreePeople’s Founder and President Andy Lipkis was a forward-thinking youth who began an environmental nonprofit at the age of 17 after being inspired by the dying trees in the Angeles National Forest. Similarly, Sam Francis, one of California’s most influential abstract expressionist painters with art hanging in LA museums like the Broad and the Norton Simon Museum, also drew inspiration from nature in forests, lakes, rivers and the ocean while living around the San Francisco Bay Area.

Growing up, Sam Francis loved being surrounded by trees, such as the towering Redwoods, and often went fishing and camping with his father, his brother, and his children over the years. In celebration of Francis’ love of nature, TreePeople is collaborating with the Sam Francis Foundation to unveil a special edition Sam Francis artwork tree dedication card. 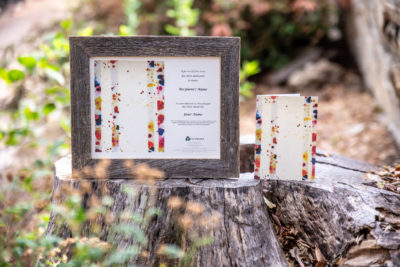 Francis believed that humans had an unbreakable bond with nature and were required to treat the earth well and bring positive and creative solutions to environmental problems– a theme prevalent throughout the artist’s life.

[blockquote source=”Sam Francis“]O Nature! O Wilderness…contact with wilderness means to me a new beginning––it means connection to the creation of the cosmos. Please let us tread lightly…nature is the blood of the universe streaming in the firmament, not one drop to be lost…the wilderness is my beacon.[/blockquote]

Francis’ paintings included a transformation of the four elements (earth, water, air, and fire) with color to invoke a force in nature and in the mind. His landscape-inspired imagery was born from his time spent outdoors, evoking references from everything such as the sky, clouds, water, trees and plants, to the desert, rocks, and mountains; he also painted the heavenly bodies of the planets, stars, moon, and sun.

The artwork being entrusted to TreeePeople for use in their Tree Dedication Program is Francis’ creation Untitled (SF74-89, 1974) gouache on paper, where his imagery loosely alludes to tree trunks with leaves of color beckoning to the viewer.

His desire to create pieces that generate a dialogue and unity between the natural and spiritual worlds was a life force that permeated his career until his death in Santa Monica in 1994. Francis and his creations are recognized internationally and his work is prominently featured in museum collections in Europe, Japan and the United States, including the Metropolitan Museum of Art and the Museum of Modern Art, New York, among others.

Special thanks to the Sam Francis Foundation for their support of our work by giving the gift of trees, and partnering with our Tree Dedication Program to unveil a special edition Sam Francis tree dedication card.

Honor the art-lover and others in your life who bring you beauty and joy with a special Sam Francis and TreePeople Tree Dedication today. Use the code “SAMFRANCIS18” to take 15% off your order before the end of August 2018!

Written in collaboration with TreePeople and the Same Francis Foundation

As TreePeople's Annual Giving Coordinator, Victoria Wolfe supports our vision to create a greener, healthier LA by running TreePeople's Tree Dedication Program and supporting the annual fund with a donor-centered approach. She believes in the power of the single act of planting a tree, which means you can often find her out on the weekends volunteering at mountain restoration events. When she's out from behind her desk, you may catch her rock climbing or hiking the beautiful mountains of Los Angeles.