Our Director of Park Operations, Jim Hardie and his wife, Eileen Knight have been the “it” couple around TreePeople for many years and contributed so much to the organization, but their real pride and joy has been our summer entertainment series, Once Upon a Canyon Night.

After 15 seasons of beautiful music, hysterical comedy and powerful theater, it only makes sense that the start of Once Upon a Canyon Night came from the love and passion of these two amazing people.

They met while both working in the casting office of the Mary Tyler Moore Studios and bonded over their love of the arts and wine. “The rest was history,” as Jim puts it. 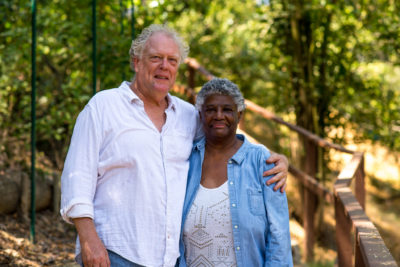 Jim was a member of the TreePeople Board when the beautiful S. Mark Taper Foundation Amphitheatre (Thanks, Steve Martin!) was completed in 1998 and had a vision for the best little outdoor venue in town. As fate had it, the acting ensemble Jim was part of, Actors Conservatory Ensemble (A.C.E.) was looking for a new location and TreePeople was the perfect spot— and our summer series was born!

While Jim performed on stage, Eileen directed and cast many of the stage readings.

Eileen remembers fondly having their son, Jackson who was a 4-year-old at the time, run around the stage as she sat in the stands and imagined how their plays would fill the hills nestled above the city with entertainment.

One of her favorite memories was directing A Soldier’s Play. “It fit so well up here in the park. The first night we did it, there is a scene at the beginning where soldiers are drunkenly coming down a ramp and the stage direction said ‘fog is rolling in’ and fog actually rolled in!”

Even after many years and dozens of productions, the thrill of it all is still there. You can see the passion Jim has for the series and of course Eileen too, “It’s been a wonderful thing to be able to work together like this on something so creative with your partner,” Jim says.

As in life, hardships have been felt during the 15 seasons of Once Upon a Canyon Night.

Eileen was diagnosed with cancer a few years ago and had to receive a bone marrow transplant causing a short hiatus. “It is amazing that I am here. I was so incredibly blessed to have a brother who was a 100% match for my bone marrow transplant. It was a really scary time but when it’s all said and done, it’s pretty spectacular. I still have some issues but those aside, I’m here.”

Jim never left her side, “He is the reason I’m here today. He is the glue that holds everything together including Once Upon a Canyon Night. He’s a blessing.”

After the years of hard work with all of its ups and downs, this dynamic duo plans on taking a back seat in next year’s series and hopes to enjoy seeing the show grow in the years to come.

“It’s evolved so much over the years! We went from doing only six plays or stage readings a season to now having a variety of plays, concerts and events every weekend over the summer. It all would not have been possible without the amazing core team we have at A.C.E. either,” Eileen says.

“It could not have been possible without her,” Jim replied looking at her fondly as tears fill his eyes.

This year’s season features special performances from Maz Jobrani, Louden Swain, The Improvised Shakespeare Company and much more! Make you sure you don’t miss out on all the love that went into this summer’s Once Upon a Canyon Night and if you’re lucky you’ll sneak a peek of TreePeople’s “it” couple doing what they love most, being together.

After graduating from Cal Poly San Luis Obispo with a degree in Forestry and Natural Resource Management, Caitlin discovered a passion for working in social media and marketing and eventually found her way to TreePeople. With her unique forestry and marketing background, Caitlin is now growing and thriving within TreePeople’s Yurt Village. She loves that she can bridge the gap between science and marketing and is at the frontlines of educating Angelenos on trees and how they can save LA.