What do Velcro, bullet trains and LED lights have in common? Their designs were inspired by nature.  It’s true!

The Kingfishers’ ability to dive at into water at high speeds to catch prey inspired the aerodynamic design of modern bullet trains.

The tiny seed casings that stick to your clothes while you’re on a hike inspired Velcro hook designs.

Even LED lights were inspired by nature–by studying lightening bugs!

Nature-inspired innovation is called “biomimicry,” and it’s more common than you might think! You might be surprised how many modern conveniences mimic nature, even in your own home. It makes total sense! The natural world has evolved over millions of years, finding the most efficient way to thrive. As a result, humans have overcome our day to day challenges by mimicking nature.

We even use biomimicry here in TreePeople’s Coldwater Canyon Park. For instance, our parking lot is designed to capture rainwater, and we’ve installed solar panels on our roofs. 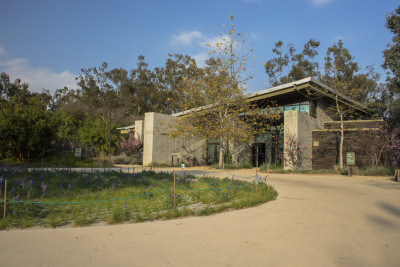 Biomimicry works because it draws on the diversity of nature. Take a walk in the woods and you’ll find a wide variety of plants and trees that rely on each other to coexist. Diversity also creates a rich habitat for wildlife and protects against the rapid spread of disease or pests.

Over three weekends in March and April TreePeople is heading out to Griffith Park’s Bette Davis Picnic Area to put this practice of biomimicry to action!  We are partnering with the Los Angeles Department of Recreation and Parks to plant 80 trees, of six different species.

This series of plantings aims to rebuild the lost portion of canopy and will increase the species diversity in the park to mitigate tree loss in the future. But we can’t do this alone! Join us to restore this gorgeous park!

Ready to join us in rebuilding this local grove of trees? Sign up for one of four events below. We look forward to seeing you there!

Peter Roquemore is TreePeople's Volunteer Manager. Peter has spent the past six years organizing communities around renewable energy, energy efficiency, and clean water. He is excited to be working side by side with TreePeople's volunteers to help grow and restore our urban forest and wild lands. New to Los Angeles you can find Peter on his bike exploring LA's streets and mountain trails or tracking down LA's best vegan taco.