Over a century ago, hundreds of Canary Island Date Palms found a new home across the sea in the Echo Park neighborhood of Los Angeles. The swaying palms brought an easy calm and tropical appeal to the area, which was home to many-a-player in Los Angeles’ burgeoning film industry, including legendary director Mack Sennett’s first production studio which launched the careers of Charlie Chaplin and Fatty Arbuckle. But just like old acetone reels from film’s silent era, these once majestic palms have begun to fade.

Climate impacts like heat, drought and old age have made these fixtures of LA’s skyline susceptible to infestation and disease. The biggest culprits are the South American palm weevil that eats the palms from the inside out, and the fusarium fungus, which chokes off the cells in the trees like a bad case of clogged arteries after a lifetime of chowing down on fast food. To make matters worse, the fusarium fungus spreads not only by invasive pests but also through contaminated soil — meaning if a replacement tree is planted in the same soil, that new tree will suffer the same grisly fate.

Thousands of infected trees now line streets from Boyle Heights to Santa Monica, their once green crowns now decaying and brown. With no known cure in sight, Los Angeles’ picture postcard image of palm trees dotting the horizon will soon be a thing of the past.

This one-two punch to our palms has already begun to change the look of the city. While palm trees are a symbol of LA’s past, now is the time to plan for the City’s future.

Palms: A Wolf in Trees’ Clothing 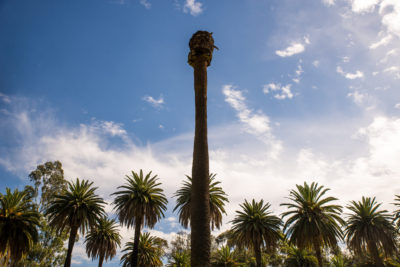 With Los Angeles’ palms on the decline, it is a good reminder that these are trees were not meant for our Mediterranean climate, let alone the hotter future we now face due to climate change. According to a study in the International Journal of Climatology, palms need twice as much water and provide half the amount of shade when compared to other trees. In neighborhoods already suffering more extreme heat events, the lack of adequate cooling tree canopy only worsen the effects of climate change. Not only that, their thirsty fronds present an acute risk to wildfire, with only a stray ember needed for them to light up like a matchstick. 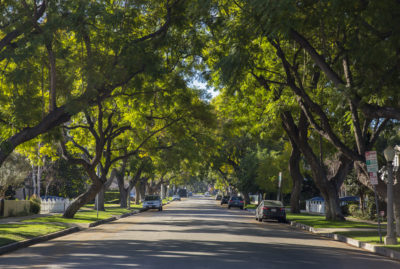 While in some ways sad, this palm tree (which are actually a type of grass) die-off is an opportunity to give Angelenos the protections they need in a time of rising heat. LA can still be beautiful even without gentle breezes rustling the palms lining our streets. Trees are like acupuncture needles; when the right tree is planted in the right place, healing takes hold.

Right now, if we keep up with “business as usual,” some LA communities will see a tripling effect of days over 95 degrees by 2050, sweeping some neighborhoods like Sylmar and San Fernando into 4 months of extreme heat each year. This is a public health crisis for all Angelenos. More Americans now die from heat-related illnesses than all other natural disasters combined. It can feel crippling when you look at the numbers, but there are solutions.

We now have a unique opportunity to plant the right trees in our neighborhoods to provide life-saving cooling throughout Los Angeles. For more more information on rising urban heat and what needs to be done, visit our website.

As Digital Content Specialist, Adam brings a decade long passion in telling people's stories to TreePeople. From the joy of a tree planting to the behind the scenes efforts of our policy advocacy and restoration work, Adam captures it through his lens so it can be shared with the world.