Tyson was only 7 years old when he and his father Rick planted their first tree together. That was also when Tyson was diagnosed with cancer. Rick’s connection to nature, and to that tree they planted, gave him strength throughout the tough years ahead.

Nature is Rick’s refuge, his place to reboot, which is why he spends every weekend hiking the Santa Monica Mountains. He and a close friend spend entire days “lost” in Malibu Creek State Park, taking pictures of flowers, identifying plants and exploring new trails. It’s also part of his job as one of the park’s docents for over 20 years, and while he is very modest about it, he currently holds the post of President.

When Tyson was diagnosed with Rhabdomyosarcoma, Rick and his wife Kelly found themselves dropping everything to make their son well again. Rick can still remember how it felt.

“Nobody has the tools to deal with that. You can hear about it from other people, but until it happens to you, you don’t know what to do and it floors you… You’re making decisions that nobody should have to make.”

“Tyson was obviously sick,” Rick remembers. “I had him bundled up.”

In 1997, Rick knew it was fate when he received a TreePeople tree dedication in honor of Tyson and found out the tree would be planted right in Malibu Creek State Park. Tyson was already in the middle of chemotherapy and radiation, but the two wanted to go together to plant the tree. Rick says Tyson was “a strong-willed child” and “rambunctious.” But even though Tyson wasn’t feeling like his normal self, the two still decided to go.

That morning they learned how to plant the sapling from a TreePeople staff person. Tyson then took on the important job of picking the tree they were to plant– they happened to be valley oaks– Rick’s favorite tree. TreePeople planted many trees at the event, but Rick and Tyson could only stay for one, so they wanted to make sure it was done with heart. Rick even buried a rock with Tyson’s name on it at the foot of the tree.

Over the years, not all of the trees that were planted that day survived, but Tyson’s did. Whenever Rick was up in the mountains he would hike to Tyson’s tree. “I know TreePeople scheduled waterings, and they must have done enough of those because Tyson’s tree has made it,” he says.

When Tyson was eight he had his first surgery, one of many follow-up surgeries he would have to have throughout his life. Slowly, Tyson was able to start living his life again.

Today, Tyson is 27 years old, has a Bachelor’s Degree in Communications from California State University, Northridge, and is preparing to travel abroad to teach English as a second language. He shares his father’s love of nature and frequents Malibu Creek State Park in his pursuit of the perfect wall as an avid rock climber. He also writes and performs hip-hop music under his middle name, Forrest.

Rick knows how much trees heal first hand, as Rick had his own battle with cancer.

One day at the family ranch, Rick, his Father, and a close friend came upon an owl that had gotten stuck in their fence. They worked for almost an hour to untangle the animal– its wing had been caught in the fence and it had been badly hurt. But when the bird was freed, it took a couple hops and soared into the sky and away into the canyon. Rick remembers feeling overjoyed and calling out, “Go! Fly!” through tears of joy. In his happiness, he felt something off in the back of his throat, and after visiting the doctor they found he had papillary squamous cell carcinoma.

Throughout Rick’s battle with cancer, he had third-degree burns on his neck and had to go through 39 radiation treatments. Throughout the entire time, he never took any pain medication and never stopped working. Rick says he looked up to Tyson as his role model. “I had my comparison point. If he could get through it, I could get through it,” he reminisces lovingly.

Rick didn’t stop visiting the park though and found healing under a big oak tree. He would sit underneath it for hours and he says it gave him what he needed. “Nature played a very big role in my healing. It wasn’t just there, it was necessary.” 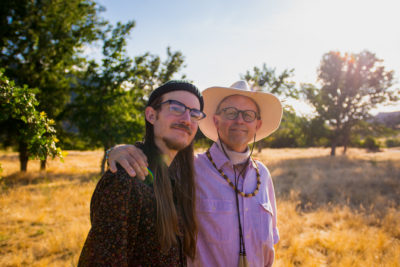 Today, Rick and Tyson are both healthy and well. Rick is proud he was part of helping Tyson find a connection with nature. He is also thankful that organizations like ours exist, and supports the forest restoration work that we do. “It’s critical. You’re creating.”

Inspired? Want to make a tree dedication in honor of someone you know? Visit our website for more information, or call us at (818) 753-TREE.

As TreePeople's Annual Giving Coordinator, Victoria Wolfe supports our vision to create a greener, healthier LA by running TreePeople's Tree Dedication Program and supporting the annual fund with a donor-centered approach. She believes in the power of the single act of planting a tree, which means you can often find her out on the weekends volunteering at mountain restoration events. When she's out from behind her desk, you may catch her rock climbing or hiking the beautiful mountains of Los Angeles.