Husband and wife Mark Rinaldi and Debbie Imsland have long been interested in sustainability. At home, they were conscientious about conserving water, taking care not to water the lawn too often or stay in the shower too long.

But it wasn’t until Debbie attended one of our Rainwater Harvesting Workshops that they considered making some major changes to their Gardena home. It started when they installed rain barrels in their yard, but it wasn’t long until they turned to their lawn.

“There’s no house that looks like ours anywhere in the vicinity, and we’re pretty proud of that,” said Mark. “It’s like living in the forest in the middle of Gardena.” 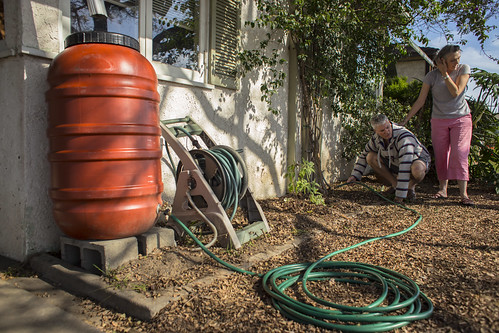 “We were pretty inspired by getting the rain barrels and listening to the seminars,” Mark said.

Mark and Debbie got their rain barrels at one of our truck sales, which were free after taking advantage of the LADWP rebate.

While at our workshop (one of our Green City Workshop series), Debbie also learned about different types of soils, and that landscaping should be suited to the soil type. So after installing the rain barrels they were thrilled to take on the next sustainable project — their yard.

“We live on a corner lot and there was a lot of grass,” said Debbie. “But we didn’t water the lawn anyway.”

By Thanksgiving 2014, they had removed 1,000 square feet of turf from their front and back yards and replaced it all with drought tolerant plants and several inches of fertile mulch. 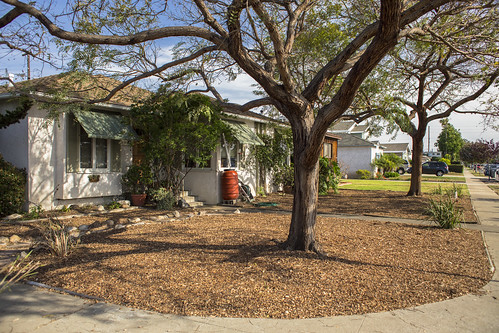 Mark transported truckload after truckload of free mulch from Manhattan Beach, as well as birch tree mulch supplied by Torrance Parks and Recreation. Debbie saved a pile of the Los Angeles Times, which they used as ground cover, while Mark collected cardboard boxes from Whole Foods, where he works.

“After every shift I’d collect the cardboard and take the tape off,” Mark said. Where there were holes in the ground cover, grass sprouted up, so he learned to avoid boxes with holes or handles.

The couple expects to receive their next LADWP rebate — this time they’ll recoup $3.75 per square foot of lawn they’ve removed — in a few weeks.

Once the grass was taken care of, Mark and Debbie added a walkway and planted a variety of drought tolerant plants.

They had experience planting trees — in 2004, Debbie completed our Citizen Forester and Tree Care Coordinator training, which culminated in a street tree planting in their neighborhood — but they asked Director of Sustainability Lisa Cahill for plant recommendations. 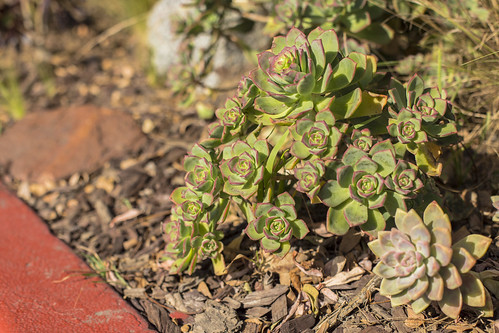 Now their lawn is home to drought tolerant irises, succulents, and other climate appropriate plants. “And in the first six inches of soil,” said Mark, “there’s life: worms.”

On a street where traditional lawns are still the norm, the project attracts a lot of attention. A sign in the front yard explains that theirs is an “ongoing water conservation project.” 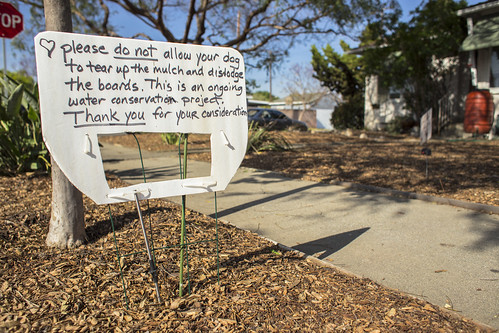 “I actually think we’ve inspired some of our neighbors,” Mark said.

“We’re really happy with everything,” Debbie added. “But when you have a lawn that’s this big it’s always a work in progress. There’s always more we can do.”

We’re so happy to see Mark and Debbie putting our sustainable solutions to use and being models for their community. You too can learn green and drought-friendly techniques that save money, time and water by attending one of our FREE workshops this Earth Month and every month. Find out more about city rain barrel rebates on www.TreePeople.org.