In 2012, TreePeople began an exchange between government, research and community organizations in Australia and Southern California. The aim of the program: to share innovations, best practices and experience in urban rainwater capture, water conservation practices and drought response—topics that are increasingly relevant as the climate of the American Southwest (and beyond) changes for the drier.

Australia experienced several devastatingly dry episodes in the last 100 years. The most recent—called the “Millennium Drought”—started in 1997 and continued through 2010, and brought the country’s longest period of rainfall shortage on record. The Millennium Drought was so severe and long-lasting that it became the foremost national issue for most Australians. It created a profound need for solutions and produced a popular and political atmosphere supportive of deep investment and rapid innovation.

TreePeople’s intent is to help Southern Californians—from residents to policy leaders and everyone in between—to quickly develop and implement a sustainable approach to meet water needs in the face of our own looming long-term water crisis, learning from Australia’s response. 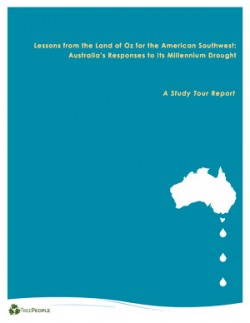 The resulting study tour report highlights what we learned—including both successes and challenges.

We encourage you to download the report and check back as we make more progress. Let us know what you think at naturalurbansystems@treepeople.org.

Funding for this project provided by The Boeing Company