Enter Ground Operations, the new documentary that follows vets who fought in Iraq and Afghanistan only to face a daunting transition back to civilian life. As filmmakers Dulanie Ellis and Raymond Singer show, organic food production is creating a restorative road home. Working with soil, plants, and animals, veterans de-escalate from the high velocity of combat in a revitalizing natural setting. “I realized I could be a nurturer instead of a destroyer, and that was a significant realization for me,” says a Marine.

Navy veteran, Social Justice Learning Institute (SJLI) founder, and valued TreePeople collaborator D’Artagnan Scorza is an urban farming pioneer featured in Ground Operations. As a community leader in Inglewood, Scorza is working with students and neighbors to create 100 home, school, and community gardens in a part of Los Angeles considered a “food desert,” where access to wholesome, fresh food is scarce. As Scorza puts it, “The military taught me to be effective. I realized I could make change in my own community.”

Ground Operations screens in Los Angeles on Thursday, March 28, at The Hub LA, and Scorza, a founding member, will be speaking before the film. A panel discussion on the role that veterans can play in urban food production includes: Ellis and Scorza; Farmer-Veteran Coalition’s founder, Michael O’Gorman; Andrew Douglas, Project Manager for the Garden of Defiance (CA State Home for Veterans, West L.A.); and LAUSD Teaching Gardens coordinator and veteran, Randy Ryan. 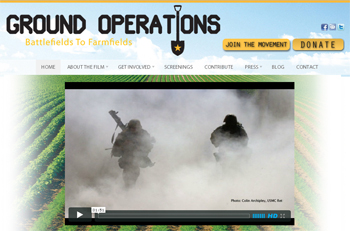 Seating is limited and advance reservations are required. Tickets to the event are $20 for the public and free for veterans. Donations will be accepted to support SJLI’s local program 100 Seeds of Change, and the Ground Operations national audience engagement campaign to support veterans in agriculture.

Co-presented by The Hub LA, TreePeople, and Volunteers of America

Carolyn Gray Anderson is an editor, writer, and nonprofit communications professional in Los Angeles. She volunteers regularly with Good Karma Gardens and at the Learning Garden at Venice High School, enjoying many a meal straight from the earth. She loves TreePeople almost as much as she loves trees.