Did you know that only 11% of LA city’s water supply comes from local sources? What if we told you we could increase that number to thirty percent—or even forty five—by simply capturing rainwater? Thankfully, a partnership between TreePeople and the Los Angeles Department of Water & Power (LADWP) could make those estimates a reality. 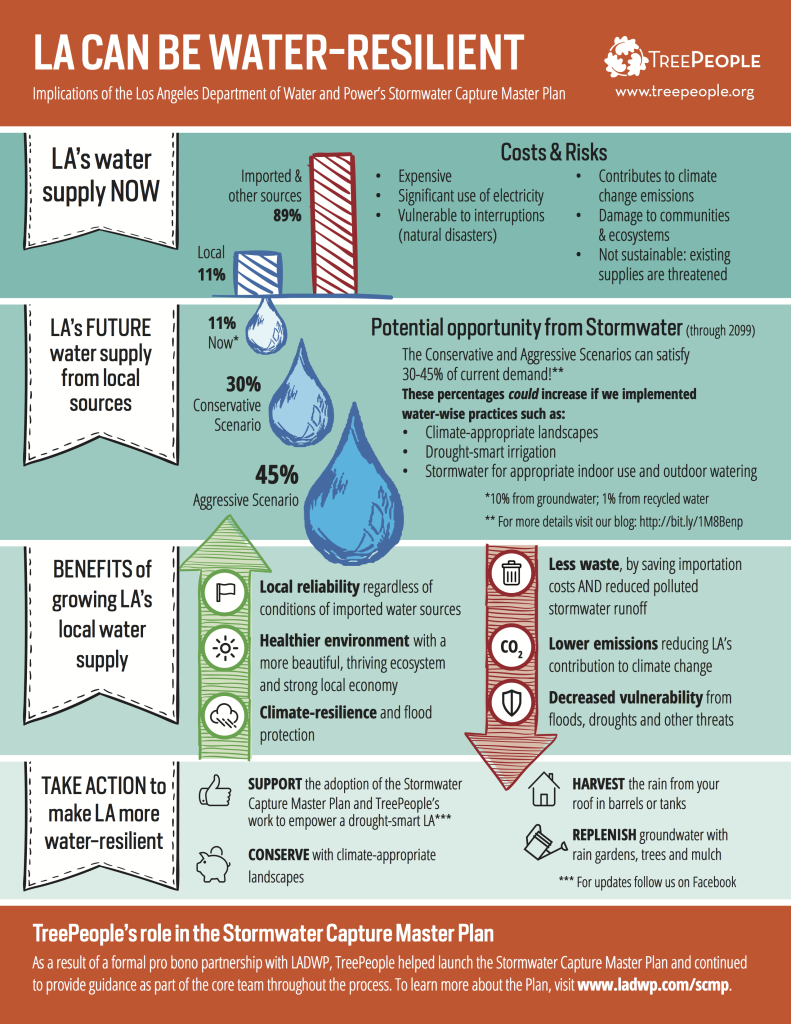 Currently, Los Angeles spends millions of dollars to import water from faraway places like the Eastern Sierra Nevada Mountains, Sacramento-San Joaquin Bay Delta and the Colorado River. Ironically, as we spend our resources on importing costs, we’re simultaneously allowing precious stormwater to run down our streets, straight into our oceans and rivers—collecting pollution and toxic chemicals along the way.  There is hope, however. We can adopt new habits for a bright future. In the face of the existing drought, it’s imperative that we begin to seek sustainable water management to develop a water and climate resilient LA.

Here’s the good news: TreePeople, the LADWP, and other agencies have worked together to develop the Stormwater Capture Master Plan. As seen above, locally captured stormwater could equate to up to nearly half of LA’s current water demand if the required infrastructure, programs and policies are funded. These investments could provide billions of gallons of water for public use, and decrease our reliance on imported water while also creating a boon for our economy by providing local, sustainable jobs.

Interested in advocating or hearing more about the Plan? A public meeting to present the Final Stormwater Capture Master Plan is being held this Thursday, June 25th at LADWP Headquarters, as well as via a live webcast. Click here for more information and to RSVP now.

Now is the time to take action. Be present and make your voice heard.