LA is turning a corner toward being a more water-secure city, and TreePeople is proud to be a principal partner in the city’s Stormwater Capture Master Plan. This cross-agency vision is providing tangible hope for weaning LA off our vulnerable imported water supply. Though change is beginning to happen, there’s a long way to go. Read more in this story from yesterday’s Wall Street Journal:

LOS ANGELES—A bone-dry span of eight months has come to a close as rainstorms finally drenched the Southern California region. But experts say the rain could have reaped far more benefit if local infrastructure had done a better job of collecting it.

Instead, most of the water that falls here annually surges across the city’s concrete expanse and into the Pacific Ocean. The Los Angeles River, paved over decades ago to prevent flooding, carries much of the runoff out to sea.

According to officials, the recent storms dropped more than 5 inches of rain in some areas, and storm-water capture facilities gathered an impressive-sounding 3.6 billion gallons of rainwater countywide. But that amounts to only about 2% of the 179 billion gallons consumed just in within the city of L.A. each year.

“If we could capture every drop, it would probably be enough for the region,” said Marty Adams, director of water operations at the Los Angeles Department of Water and Power. Capturing more rainfall would also prevent pollutants picked up by runoff from reaching the sea

In L.A., collected rainwater is routed into vast “spreading grounds”—sand- or gravel-bottomed pits that allow water to soak back into the ground, replenishing the groundwater supply. But, Mr. Adams said, while not every drop of water lands in a place where it can be used, “We realized we’re not really capturing that big a percentage of the rainfall.” Meanwhile, he said, the agency expects to spend between $350 million and $400 million buying water from elsewhere this year.

Groundwater sources currently account for only about 11% of the water supply here. By contrast, the city imports over 80% of its water—51% is pumped in from Northern California and the Colorado River, 37% comes from the eastern Sierra Nevada via the L.A. Aqueduct and 1% is recycled. 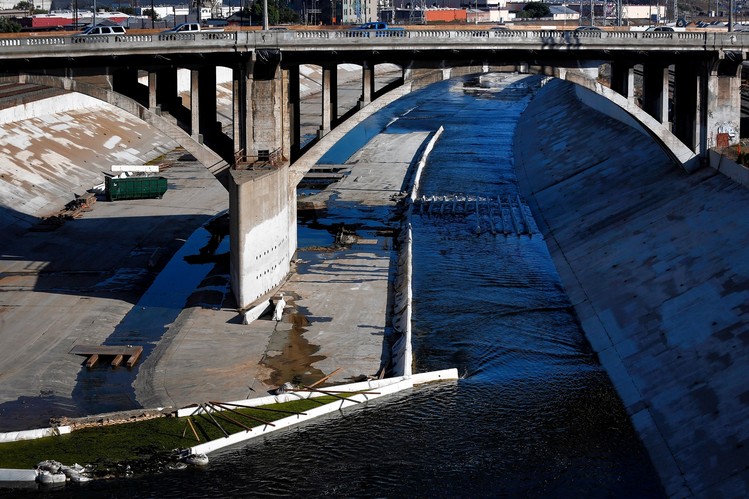 The Los Angeles River during a drought in June. City officials are considering ways to capture more rainfall for reuse. BLOOMBERG NEWS

Late last year, the agency set out to develop a new “master plan” for capturing storm water. The plan, slated to be presented by the middle of next year, considers solutions ranging from larger and improved spreading grounds to rain-capturing gardens and water-permeable pavement.

But more L.A. residents are taking things into their own hands. Spurred by drought concerns, some homeowners are installing rain barrels and larger cisterns to capture rainwater on their own properties for reuse.

Andy Lipkis, founder of the local environmental nonprofit TreePeople and a prominent advocate for residential rainwater collection, says contrary to what many believe about Los Angeles, “It actually does rain here—even in the drought!”

Marilee Kuhlmann, a sustainable landscape designer, says some of her clients have managed to irrigate large properties using only water collected in cisterns, although she said a 1,000-gallon cistern can cost anywhere from $1,000 to $5,000 to purchase and install.

According to the county’s Department of Public Works, the average Southern California family uses about 500 gallons of water each day, roughly 70% of it for landscaping, swimming pools and other outdoor uses. Under current drought regulations, that percentage has likely gone down slightly.

Ms. Kuhlmann said two years ago only about one in 10 clients explored the idea of installing rainwater-capturing cisterns. Now she has that conversation with at least half of her clients.

Mr. Lipkis likes to tell people about the 216,000-gallon cistern his organization maintains at its Hollywood Hills headquarters. Speaking on a panel here last week, Mr. Lipkis described how TreePeople was able to capture 81,000 gallons of water from just four inches of rainfall earlier this year.

Mr. Lipkis says he imagines millions of L.A. homes with rainwater-collecting devices linked up to a local “water grid” to supply the city’s water system.

Mr. Adams of DWP says such a system could present “legal issues” if any part of it were to malfunction and cause flooding or erosion. But with a new directive from Mayor Eric Garcetti to reduce the amount of imported water the city purchases by half over the next 10 years, Mr. Adams said he’s considering various options.

In developing the Stormwater Capture Master Plan, for example, officials are evaluating offering incentives to residents who install cisterns, permeable pavement, rain barrels and rain gardens to capture rainwater for infiltration or reuse. “It’s all workable,” Mr. Adams said, “we just have to be smart about it.”

TreePeople’s leadership in this topic has been making headlines nationally this month. In case you missed it, check out this article in the New York Times from last week. Even with the recent rain, LA’s long-term water sustainability is on peoples’ minds. TreePeople is proud to have been demonstrating practical, nature-based solutions for more than two decades.

Jessica is TreePeople’s Director of Marketing and Communications. A native Southern Californian, you can find her wandering local trails, hanging out with her sidekick, Penny the Rescue Puppy, on her yoga mat, reading some Phillip K. Dick, or in her kitchen cooking up vegan confections.

Jessica's professional background goes back to her time working at PETA where she worked on celebrity campaigns, and a stint in the entertainment industry, where she worked at Technicolor on their Global Marketing Team.